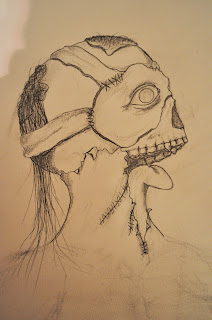 In Europe we call it an `Angel smile`.
In Japan it`s called `Kuchisake-Onna`.
In Korea it is known as `The Red Mask Lady`
In America the 'Glasgow Grin'


A young woman walking down the streets, with a surgical mask. She  is thin and pale skinned and she wears a long crimson coat Walking alone with her head down. And when she see a child or man, she will ask: "Am I pretty?"

This is the famous legend of the woman with a slit mount. Her mount is slit from ear to ear. And she ask strangers if she is pretty.

But what you answer her can make your life horrible.


She is wearing that crimson coat for a reason,... for the bloodstains.
So the answer you are giving her is life dependent.

If you answer: "No"
She will kill you instant.
With what weapon varies, but it is most likely the weapon that slit her mount.

If you answer: "Yes"
She will take of her mask, and will ask again: "Am I pretty?"

If you answer again "Yes",
She will take her weapon and slit your mount just like hers.

So is there no escape? Are you doomed if you encounter her?
Legends say there is an escape.
-You can mess with her mind when you answer to her; 'you are normal, average,..'
So she have to think and gives you time to run away.
- You can give her candy, like most woman likes candy. Give it to her or trow it before her so she will pic it    up or eat it. That gives you the chance to run away.


Were does the legend comes from?

This legend originated in Japan, as far back as the Edo period. Legend has it that a jealous man accused his beautiful, vain wife of adultery, and slit her smile with his sword. “Who will think you are beautiful now?” he asked, assured of her faithfulness from then on.

The story resurfaced with a vengeance in 1970’s Japan. It is said—this is, remember, an urban legend, so any information can be passed along with a clear conscience—that in the late 70’s, a woman who attacked and killed children was hit by a car while chasing a child, and as a result, her face was split into a macabre grin.
It is theorized that this real woman’s death was the catalyst for the story’s resurfacing and spreading.
Around 2004, the legend hopped to Korea, which added the detail of the red surgical mask.
It seems to be more prevalent here these days than Japan, but these stories come in waves.
The facial deformity that the Red Mask Woman has is commonly called a Glasgow Grin, because the practice is said to have originated there (clearly not true, as they were doing it in the Edo period of Japan).
In the much publicized murder of Elizabeth Short (the Black Dahlia) in America in 1947, her mouth was slit in a Glasgow Grin. Victor Hugo, in 1869 France, wrote The Man Who Laughs, a novel about a man whose mouth had been cut in a similar fashion.
More recently, and perhaps most famously, Heath Ledger’s Joker in The Dark Knight sported this mutilation.
Clearly the idea, one of being hurt so much you’ll never frown again, rings true in cultures world-wide.
The juxtaposition of pain and the image of a smile, of a smile made out of scars is a jarring one.

What can we tell about the appearance of the woman?

She must be a young woman, around the 20 years old. She wears a crimson coat and a surgical mask.
But in Japan thousands of people wear those masks. So it must be hard to identify her. It could be any woman with a mask and crimson coat.
How did she became disfigured? It could have been plastic surgery gone wrong, perhaps it was a car crash. Or maybe she’s so crazy that she did this to herself, hoping for a more beautiful smile.
Or was it her jealous husband.
There are other rumors about her:
-She can run 100m in 3 seconds
-She is one of three sisters
-She likes the number 3, she often appears inplaces which have "three" in there names.

I say it is possible!
How so?

In Europe the 'Angel smile' is rare but happens.
It's when a gang wants to rape a girl, and they put a knife in her mount and ask if they can have sex with her. If she say no, they will slit her mount.

So it may be possible that a girl takes revenge to men, and kill or slit there mount.
But it is not something you hear on the news or read in the newspapers.
But it is still possible.
Or a psychopath that likes the idea and dresses up like the woman to kill children or men.

That she can run 100m in 3 seconds is not really realistic, and not all versions say so.

So if ever encounter a woman with mask and she ask you if she is pretty...RUN, run for your life!

Posted by Cyberator at 2:25 PM

I believe its true in a sense, but the running no. If someone slit my mouth id pray on the "normal" too.

Can a Silver bullet do any thing to here or make her angry?

Probably not but I would imagine decapitation would get her fuck off.