On January 22, 1985, the Coventry Freeman organization were having a dinner event at St. Mary's Guildhall in Coventry, U.K. Everyone in the group had her or his head bowed in prayer when this photo was taken -- including a towering, mysterious figure standing top left. The strange cowled spectre appears to be wearing clothing much like a monk's frock from another time. Lord Mayor Walter Brandish, who was present at the dinner, said there was no one at the event who was dressed like that, and he could not explain the presence of the interloper in the photo. 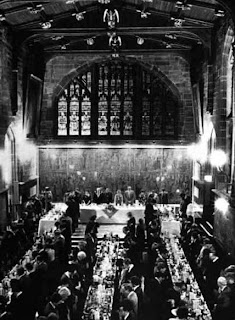 The guildhall served as the combined headquarters of the united guilds of the Holy Trinity, St. Mary, St. John the Baptist and St. Katherine.

Following the suppression of guilds in 1547, for a time it served as the city's armoury and (until 1822) its treasury, as well as the headquarters for administration for the city council until a new Council House was officially opened in 1920.


The Building has a vaulted undercroft which is currently a restaurant.
You can even rent the room for weddings or other things.

There is not much information to find.


The picture does not look fake. But there are things that that could create this effect.
It could be an object, like a standing armor.
Or a shadow drop on someones face.


I was first wondering why someone takes a picture during a pray.
But that could have been a smart reason of the photographer. It must be difficult to make a photo in a room with not much light and everybody moving. So he made the photo when everybody was not moving... during the pray. So the photo will have enough light and will be sharp.

The mysterious figure can be everything, so it will always be a mistery.


Posted by Cyberator at 6:00 AM No comments:

Maggots In The Brain

This is the case of Mr. Shota Fujiwara, a japanese man from Gifu Prefecture.
He complains incessantly about a persistent headache.
Mr. Shota Fujiwara loves his sashimi and sushi very much to the extent of trying to get them as "alive and fresh" as can be.

He developes a severe headache for the past 3 years and has put it off as migraine and stress from work.

It was only when he started losing his psycomotor skills that he seeks medical help.

A brain scan and x-ray reveals little however.
But upon closer inspection by a specialist on his scalp, the doctor noticed small movements beneath his skin.

It was then that the doctor did a local anaesthetic to his scalp and discovered the cause when tiny worms crawled out.

A major surgery was thus immediately called for and the extent of the infestation was horrific!

The worms on the head of Shota Fujiwara are actually the parasites that usually found on the body of raw fish.

A man gets an ingrown hair on his head.
After some time, it gets infected and the man gets a boil.
Weeks are passing and the boil is still growing every day.

The hair and infection are eroding downwards to his skull.
People keep telling him to go to the hospital for checking his boil.
But he refuse to do so.

The infection reaches his skull.
Bone, once infected, presents little barrier to the spread of infection to contiguous bone and so it spreads within his skull.
The bone dies and begins to erode.

People are noticing a smell and keep telling him to see a doctor.
The smell is starting to attracts flies which begin to lay eggs in his festering wound and maggots take hold.

Your brain just isn't supposed to be on your outside and presents almost no barrier to anything when exposed.
Now, infection and maggots set to work on his brain.

This makes him feel a little wobbly on his feet and he decides to see a doctor.
He walks in to the Stanford ER and doctors found several maggots in his brain.

This is claimend to be true, but I can not say for shure it really happend.

On the medical matter, maggots can infest the human brain, evidently, and so can certain types of tapeworm larvae.
But these conditions are fairly rare, and the chance of resulting from ingrown hairs or sushi is close to impossible.

Tapeworms and roundworms and their eggs which abounds in all fishes fresh or saltwater can only be killed by thorough cooking and/or freezing the fish to between 4 degC - 0 degsC.
The eggs of these parasites can only be killed if it is cooked or frozen to the said temperatures for a week or more.

Think twice about that raw dish next time... or you might get a headache.


Enjoy your monthly scary picdump with some scary gifs!