The Book of Revelation 12:7-9 describes a war in heaven in which Michael (Jesus Christ) defeats Satan the Devil.

But in Malabon City there is a very special and disturbing tomb.

Simeon Bernardo's tomb has a statue of the Devil triumphant over St. Michael Archangel.

Through the years, this unusual tombstone has been featured on television and in some newspaper and magazine articles.

To this day, the tableau never fails to draw attention, especially on All Saints' Day when the living troop to the cemeteries to remember their dead loved ones.
There are people who claim that the Devil statue moves and terrorizes humans at night.

Some say that the figures used to be small and supernaturally grew each year to its current height. A few whisper about the devil roaming around the graveyard at night. And more stories pervade about the tomb below the sculpture, which up to this day remains blank and probably empty.

A marker on the left reveals an exchange between Lucifer and Michael; the devil proclaiming that he owns the world and Michael pleading to the people.
On the right is a crumbling bas relief of Adam and Eve, probably a symbol of the first sin of man. 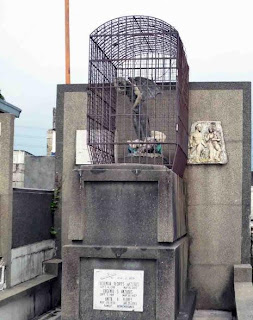 Don Simeon Bernardo of Barangay Concepcion had it made.
In a GMA News feature in 2007, the grandson who was interviewed by Kara David said that it was his grandfather's express wish to have the statues placed on his tomb.
He also said that contrary to what some people think, Don Simeon was not a satanist; that he was in fact, a very prayerful person.

Apparently echoing Mang Floren's belief, a great grandson, Mr. Lubis Bernardo, said that the late Atty. Sumilang Bernardo, daughter of Don Simeon, once told them that the reason why her father had the statues made was that he believed evil was prevailing over good in the world.

Both Lubis and his Uncle Floren mentioned that a relative of theirs once said they could remove the statues if people changed for the better and good really prevailed in the world.

If indeed Don Simeon Bernardo's intention was to remind us, he has pretty much succeeded.

The statue still exist, and you can visit it for yourself.

In the late 70s, according to Lubis, Atty. Sumilang asked him to replace the statues because they had been destroyed by addicts.
It so happened that the replacement statues were bigger than the original (by approximately five inches), and it seems there was even talk by some people who didn't know about the replacement, that the devil was getting bigger!

The statue could be possessed, but a scary statue in a place like a graveyard can play tricks with your mind.

We may live in his world, but Satan will never triumph!

Imagine that you’re sitting quietly on a nice cozy afternoon.
You’re reading your favorite book and no worries crosses your mind.
Suddenly, you feel heat grow all through your body, and after a few moments you’re engulfed by flames, leaving nothing but a faint smell of burnt barbecue and your cremated remains behind.

To burn a body you only need two things: intensely high heat and a flammable substance.
For example; You poor gasoline in someone’s body and then light it up. Or your still lit cigarette falls from your lips when you fall asleep.

Spontaneous Human Combustion, as the name already says, is when a human being suddenly burst into flames without any clear sort of either of these two thing.
Although the reason why is not very clear, many reasons are being studied - not only by scientists, but by paranormal experts who say that there’s something else beyond chemicals behind this phenomena.

There has been about 200 filed cases on SHC - the latest of which happened in 2010 when an Irish man named Michael Faherty, 76 years old, died at his home in Galway on 22 December.
Policemen say that the fire “destroyed only the body, the ceiling above him and the floor underneath him.”

No other forms of ignition were found, thus leading the coroner to label his death as “Spontaneous Combustion”.
It is a bit disconcerting that something like this happened not so long ago.

When Mr. Gosnell, a meter reader, went to Dr. Irving’s house on a December morning, he couldn’t really expect to see the 92-year-old Doctor turned to dust, but well, it was what he did in fact find.

The only thing left of the Dr. was his lower left leg, with a shoe still on, and dark ashes.

The coroner would only state that the physician died of “death by asphyxiation and 90 percent burning of the body.” But what could’ve caused this? One of the theories was that he slept with his pipe still on - but his pipe was far away and seemingly unused; there were no other sources of fire.
It also seemed that Dr. Bentley’s fire started in his bedroom while he was asleep.
He then woke up, ran to the bathroom (probably to try and water down the fire), but met his demise there, where his remains found the next morning.

Mary Reeser’s landlady was the one who found her - well, not literally found her, but as she went into Mrs. Reese's apartment to give her a telegram, she found that the doorknob to the apartment was incredibly hot. Fearing for her tenant safety, she called the police.
Mary was nothing but piles of ash and legs (with her shoes still on!), and a incredibly shrunken skull which people said it was “the size of a teacup” when they found her. Even if such shrinking is not unheard of, since the heat could cause the skull to diminish, people still took it as a paranormal phenomenon in itself, bringing a lot of attention to the case on those good ol’ times.

27 year old Phyllis was just going down the stairs at Shire Hall after a ball, when her dress suddenly caught on fire. She then ran back into the ballroom looking for help, but collapsed unconscious on the floor.
People aid her, but she unfortunately died a few days later in the hospital.
There was no fire nor source of heat around, and witness say that her dress literally just caught on fire.

These are only some of the many known victims.

There are a lot of theories out there that try to explain what the hell goes on in such circumstances, but so far there isn’t a certain fact regarding SHC.
The most popular theory is that fire starts when methane (a flammable gas that has a wide distribution in nature) sparks and builds up in the intestines and gets ignited by enzymes (proteins in the body that act as catalysts to induce and speed up chemical reactions).
But since most SHC victims had more damage to the outside of their bodies rather than the insides, this theory seems unlikely.

One of the most possibles explanations is what scientists call “The Wick Effect”, that proposes that the body, when lit by a cigarette, smoldering ember or whatever other heat source, acts much like an inside out candle.

So, is there anything paranormal about this?
It is likely that a human body could go through such experience without the need of a supernatural source, and maybe the cause of the fire can’t be found because it got completely burned with its owner, like a cigarette or a match.
But it is something beyond our current comprehension.
And one of the many things science can not explain.

Posted by Cyberator at 1:33 PM No comments:

A garden gnome is a figurine of a small humanoid creature, usually wearing a pointy hat, produced for the purpose of ornamentation and protection from evil sorcery, typically of gardens or on lawns.

These figurines originate in 19th century Germany, where they became known as 'Gartenzwerg'  what is literally a garden dwarf.

You may have seen them in the garden of your parents or neighbors.
Some collect them, some just like to have them as a decoration.

But there original purpose is to protect you from evil.

However there are many different uses/meaning of the garden gnome.

There are many cases of people that claim to see the gnome move and walk.
Or disappear and return after some time.

What if these creatures are real?
What if they really live and protect us or are evil...


In this video on YouTube you can see some kids hanging out at night.
But they captured something unbelievable on camera.

The popularity has dropped down to have a garden gnome.

But the story that some garden gnomes disappeared and returned are true.
It even made the news.
However this was all a joke!
Many people stole, destroyed or played pranks on garden gnomes.

Is the video real?
It looked like it was filmed on a mobile phone. But where it is, who they are is unknown.
There are other videos with so called  "real" gnomes captured, but they look like it was made by the same person.

The quality is so low that is could be anything... or a real gnome...