I would say this is one of the most bizarre and huge UFO sightings in world history. 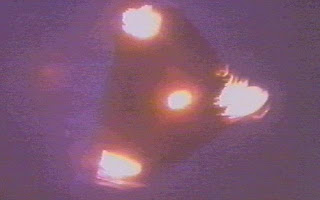 And it`s from my home country Belgium.
And even better, it is from my town!

This is one of the very best photographs ever taken of a triangular UFO!

Why is this sighting so special?

The Belgian UFO wave peaked with the events of the night of 30/31 March 1990.
On that night unknown objects were tracked on radar, chased by two Belgian Air Force F-16's, photographed, and were sighted by an estimated 13,500 people on the ground – 2,600 of whom filed written statements describing in detail what they had seen.


Following the incident the Belgian air force released a report detailing the events of that night.

At around 23:00 on 30 March the supervisor for the Control Reporting Center (CRC) at Glons received reports that three unusual lights were seen moving towards Thorembais-Gembloux, which lies to the South-East of Brussels. The lights were reported to be brighter than stars, changing color between red, green and yellow, and appeared to be fixed at the vertices of an equilateral triangle. At this point Glons CRC requested the Wavre gendarmerie send a patrol to confirm the sighting.


Approximately 10 minutes later a second set of lights was sighted moving towards the first triangle. By around 23:30 the Wavre gendarmerie had confirmed the initial sightings and Glons CRC had been able to observe the phenomenon on radar. During this time the second set of lights, after some erratic manoeuvres, had also formed themselves into a smaller triangle. After tracking the targets and after receiving a second radar confirmation from the Traffic Center Control at Semmerzake, Glons CRC gave the order to scramble two F-16 fighters from Beauvechain Air Base shortly before midnight. Throughout this time the phenomenon was still clearly visible from the ground, with witnesses describing the whole formation as maintaining their relative positions while moving slowly across the sky. Witnesses also reported two dimmer lights towards the municipality of Eghezee displaying similar erratic movements to the second set of lights.

Over the next hour the two scrambled F-16s attempted nine separate interceptions of the targets. On three occasions they managed to obtain a radar lock for a few seconds but each time the targets changed position and speed so rapidly that the lock was broken. During the first radar lock, the target accelerated from 240 km/h to over 1,770 km/h while changing altitude from 2,700 m to 1,500 m, then up to 3,350 m before descending to almost ground level – the first descent of more than 900 m taking less than two seconds. Similar manoeuvres were observed during both subsequent radar locks. On no occasion were the F-16 pilots able to make visual contact with the targets and at no point, despite the speeds involved, was there any indication of a sonic boom. Moreover, narrator Robert Stack added in an episode of Unsolved Mysteries, the sudden changes in acceleration and deceleration would have been fatal to one or more human pilots.

During this time, ground witnesses broadly corroborate the information obtained by radar. They described seeing the smaller triangle completely disappear from sight at one point, while the larger triangle moved upwards very rapidly as the F-16s flew past. After 00:30 radar contact became much more sporadic and the final confirmed lock took place at 00:40. This final lock was once again broken by an acceleration from around 160 km/h to 1,120 km/h after which the radar of the F-16s and those at Glons and Semmerzake all lost contact. Following several further unconfirmed contacts the F-16s eventually returned to base shortly after 01:00.

The final details of the sighting were provided by the members of the Wavre gendarmerie who had been sent to confirm the original report. They describe four lights now being arranged in a square formation, all making short jerky movements, before gradually losing their luminosity and disappearing in four separate directions at around 01:30.

11 july2011
A woman from Wavre called the police because she saw at night three flying sorcerers above her house.
The police went to the house of the woman to check her statement.

The woman state that she was awake by her cat at 1:30 AM.
She saw in the sky a metal object in the shape of a triangle, with three lichts at the endings of the corners.
The objects was at 20 meters above ground. Two other objects circled around before they disappeared.

The police did not find anything extraordinary but contacted the Comité belge pour l'étude des phénomènes spatiaux (COBEPS).

The woman, who said she did not drank or smoked, could not explain the spectacle she witnessed. Also in Wavre there are huge antennas, used for television, radio and other.
So maybe the aliens are attracted to those antennas.
Wavre is really a HOTSPOT for UFO`s! Seen by the Belgium Air Force. Official reports of the police.

Is this real?
Can you think of any UFO story with this amount of  "evidence"?

Would you accept there is extra terrestrial life?


When there is a truth, there are also lies.

One of those lies is the picture that was made in April 1990. 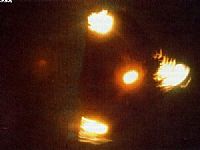 The photo of a triangular object upon which three lights are visible at each corner was taken by Patrick M. Some people claim it is an important UFO picture. Others are more skeptical, claiming that the photograph is a hoax.

For 20 years, the ufological organisation Société Belge d'Etudes des Phénomènes Spatiaux (SOBEPS) claimed that the picture was genuine.
On 26 July 2011, in an interview for RTL, a Belgian TV channel, Patrick M. confessed that it was a hoax. 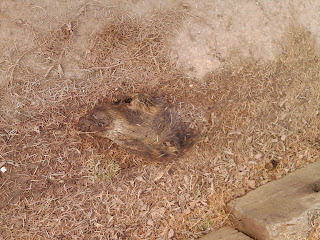 But what about the truth?

I lived in that town Wavre. But during the wave I was living somewhere else and I was only one year old.

But when I moved to Wavre, I saw and heard things I could not explain.

Strange noises at night, Strange objects high in the sky.
We even found body parts of animals laying on the streets, unexplainable.


If you want more information/interviews about the Belgium UFO wave in videos please visit this YouTube Channel.

This was a very important event, though they aren't aliens, this is the TR 3B spy plane, they were in initial testing in the early 90's, it's STILL very secret to this day, and having it classed as a UFO helps keep it hidden and secret, but do some google searches for the TR 3B and you'll be amazed!

This is the best footage of it so far, look familiar? ;-)

Thank you for the information!