Did you ever saw a Jesus face on your cracker? 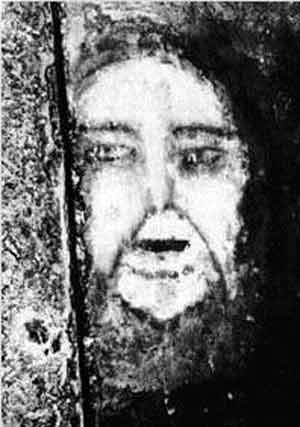 It is funny that some people claim to have seen Jesus on there door or cracker or whatever.
Or a coffee stain that looks like a holy man.

But what if there appears faces on your floor, and they keep returning?

The Bélmez Faces or the Faces of Bélmez is an alleged paranormal phenomenon in a private house in Spain which started in 1971 when residents claimed images of faces appeared in the concrete floor of the house.

These images have continuously formed and disappeared on the floor of the home.

The appearances in Bélmez began on August 23, 1971, when María Gómez Cámara claimed that a human face formed spontaneously on her cement kitchen floor. María's husband, Juan Pereira and their son, Miguel, destroyed the image with a pickaxe and new cement was laid down.
However, the Pereira story goes, a new face formed on the floor. The mayor of Bélmez was informed and forbade the destruction of the new face. Instead, the floor cement was cut out and taken for study. 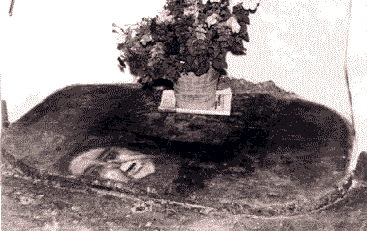 María's home was advertised to the tourists as La Casa de las Caras (The House of the Faces). By Easter of 1972 hundreds of people were flocking to the house to see the faces. For the next 30 years the Pereira family claimed that faces continued to appear, both male and female and of different shapes, sizes and expressions The phenomenon is considered by some parapsychologists the best-documented and "without doubt the most important paranormal phenomenon in the 20th century".

Various faces have appeared and disappeared at irregular intervals since 1971 and have been frequently photographed by the local newspapers and curious visitors.
Many Bélmez residents believe that the faces were not made by human hand.

Some investigators believe that it is a thoughtographic phenomenon subconsciously produced by the owner of the house, María Gómez Cámara ("Thoughtography" is considered a form of psychokinesis among parapsychologists).

But the freaky part still have to come!

The property was known to have been a graveyard in the past, so the floor was excavated in hopes of finding whatever was causing the phenomena.


When they dig under the floor they discovered the remains of humans!

Possible remains of the graveyard.

After giving the human remains a proper burial they installed a new floor.
But...
Two weeks later, another man's face appeared, and two weeks after that, the face of a woman surrounded by 9-15 tiny faces.

The floor was torn out a number of times, but the faces returned every time it was restored. The images were scrubbed with detergent, but though the eyes widened and the expressions changed, the pictures persisted; over time, the faces seemed to age. Chemists tested samples of the cement, but found no evidence of paints or dyes.

Although the events continued through 1972, there is a dearth of photographic and other hard evidence, scientific explanations.were quickly abandoned.

The debate over whether this was a case of fraud, a haunting, or psychokinetic influence (the faces' expression would sometimes change depending on Maria Gõmez Pereira's mood) has never been resolved.

Skeptical researchers point out that unlike other psychic claims this case is falsifiable. Since the faces of Bélmez are fixed on whitewash of cement, scientists are able to analyze the molecular changes that took place in such mass of concrete.

The main researchers of the Bélmez case were Hans Bender and Germán de Argumosa.
Both collaborated in Bélmez and Freiburg in the early 1970s when the ostensible phenomenon began. However, neither Bender nor de Argumosa published an official report on them. Inexplicably, Bender wrote very little about the case in his journal Zeitschrift für Parapsychologie.

Argumosa, a Spanish parapsychologist spent two years evaluating what he believed was a Gothic mystery, but published nothing on the subject either. However, Bender did mention the case in passing and referred to it in some of his lectures. His crucial statement referred to the sealing of areas of the floor where some faces were in progress with a transparent plastic material.

The only believer who has published an entire book on the case is José Martínez-Romero.
His book Las Caras de Bélmez is a collection of anecdotes.
Martínez-Romero is not worried about falsifying the paranormal hypothesis.
(An advantage of this and other cases of ostensible thoughtographic appearances is that, as the paranormal interpretation is falsifiable, it is not a pseudo-scientific hypothesis.) Argumosa himself, who used to be the main defender of this case in Spain, believes that Martínez-Romero discredited the phenomenon with his book.
The most serious publication to date by a believer appears in the first chapter of the book The Seen and the Unseen by Andrew MacKenzie. However, MacKenzie did not speak Spanish and during his stay in Bélmez lacked an interpreter. Only a taxi driver and Martínez-Romero's son were able to assist him, though very little.

Luis Ruiz-Noguez believes that the most likely explanation for the visual effect of the Bélmez images is Jordán's suggestion of the use of an oxidizing chemical agent. For example, nitric, sulfuric, muriatic, acetic acid, and others, could be used to obtain such an effect.

Another explanation might be the use of agents sensitive to light (which was not mentioned in either Jordán or Perera's repertoire of forgery hypotheses): silver nitrate which, when subjected to ultraviolet sunlight, darkens.

In general, there may be at least three chemical sources capable of producing an effect similar to that of the Bélmez faces:

(1) Products that affect the chemical structure of the cement which include some oxidizing agents and several acids (all types of cement are of alkaline nature and therefore easily attacked by acids);
(2) products that leave the cement intact but change their chemical structure upon contact with external agents such as light or chemical reagents;
(3) the utilization of a pigment in a vehicle or resin, as discussed by Ruiz-Noguez in his commentary on the ICV chart.


María Gómez, the purported psychic that allegedly produced the appearances, died on February 2004 at the age of 85 years.

After her death the popular psychic researcher Pedro Amorós tried to "discover" more thoughtographic appearances in María's house.
A new wave of Bélmez faces thus took place. However, Amorós' claims have been debunked in the Spanish media.

On May 2007, journalist Javier Cavanilles and investigator Francisco Máñez published a book called Los Caras de Bélmez, a play-on-words that means "The cheeky evils of Bélmez", where they explain the history of the scam and pointed to María's son, Diego Pereira, as author of the mysterious paintings.

When I read it for the first time, I was astonished!

How freaky it is that faces appears on your floor.

Luckily many people investigate it and came to the conclusion it is a hoax!
It is possible the lady thought it was all real and got fooled by her own son.

Of course it's a hoax.

I have always found this story so interesting, dating back to ten years ago when i was 17. I think it is even more fascinating when scientists have reported it to be true. I am skeptical, still, can't fuck with science.

Hi! Im from Spain, watch the TV program "Cuarto Milenio-caras de belmez". Its not a fraud, no quimical, no nothing...