Balete Drive is a two-lane undivided street. The road is an undivided carriageway, that is, a road without median. The road is a major route of jeepneys and cabs, serving the New Manila area, connecting Eulogio Rodriguez Sr. Boulevard and Nicanor Domingo Streets in Quezon City.

The road is famous for the antique and century old Spanish houses and Balete Trees that lies all around the road.

The road is also notable for the haunting legends that it had.

According to some Balete Drive myths a tentacled, gargantuan Balete tree used to stand in the middle of the road.

Stories have it that in the 1970's a young woman was run over by a taxi along that street.
A few weeks later, taxi drivers and motorists start to report seeing a ghostly apparition of the young woman since then known as 'the white lady'.
'She' is reported to appear at the back seat of cars, scaring motorists and driving them to accidents that cost some their lives.
The white lady is also seen crossing the street particularly on rainy days.

The Filipinos also have this belief that Balete trees are home to spirits and elementals.
They serve as portals between their realm and ours and thus stories like this abound whenever there's a Balete tree nearby.

The belief in spirits is high in the Philippines.
Many of the Filipinos had experiences with some kind of ghost, spirit, demon.

There are many hotspots for ghost, and this is one of them.

If you want to look for yourself if it is true or not, you can go to the Balete Drive. 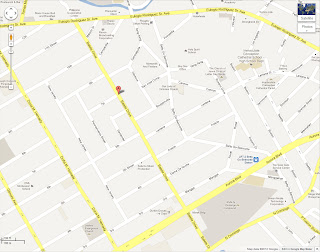 Balete Drive connects the long span between E.Rodriguez and N. Domingo Avenues in New Manila, Quezon City. It’s about 45 minutes travel from Manila via the Cubao route through Espana and E. Rodriguez Avenue.
The Balete Drive corner at E. Rodriguez is a bustling business area mushroomed with fast foods and other establishments.


I hope to visit this place in the future on a big trip. But for now I can only rely on words.


Going on vacation to the Philippines? Why not visiting the Balete Drive? Fun for the hole family!

Posted by Cyberator at 6:00 AM

If ever you'll come here, I'll be your tour guide :D

That would be amazing Ryan :D

Mr. Tim, who suggested this story to you? The Balete drive was a "panakot" (definition: a story used to scare) to me too when i was a child. I'm 24 now, btw. =p No more Balete ghost stories now. I guess the ghost has finally rested in peace.

Balete drive used to be spooky until the mid-80's. That was when the street poorly lit, and there were still many trees and vacant lots.
Now the place is already 'developed'. (More like over-developed.) No more vacant lots. And sadly, most of the balete trees are gone.

If ever there were ghosts, I hope they'd return and punish/haunt those who chopped down the pretty trees.

Sad to hear that Eric. As some say, when you destroy the object or place a ghost/demon was living it, it will move somewhere else.